Welcome to my page!

“I have done silhouettes since I was 16 and am from several generations of paper-cutters and silhouette artists.  My mother and I would draw portraits since I was a child and we would hand-cut animals, paper-dolls, birds, snowflakes, and Valentines.  Little did I know this would develop into a career that started at 8, when I received my first portrait commission.  I was a teen when a Disney art company asked me to be a portrait artist.  I immediately fell in love with their paper profile artist and gave this “lost art” a try.  The manager hired me on the spot as “the silhouette artist” saying that silhouette artists who could get a likeness and cut the interior details are rare.  This career funded my entire education in fine arts and communications, and allowed me to buy a townhouse by the time I was 22.  It has taken me around the world to meet wonderful people from all walks of life.   Since, my work is organic it is accurate.  I did not use a pattern or template.  Traditionally silhouettes are cut from black paper but they can be cut from any color.  I am the only silhouette artist in the world with authentic Vintage French silhouette paper, that I purchased in huge quantity as a teen, hearing it was going to be obsolete.

When I do a silhouette I see your light, not your shadow.  Jung says the shadow is the ego.  That is why the profiles a teacher traces off the wall is distorted.  It may be crafty and sentimental, but it will not capture your soul.  My work combines your features and who you are.  When I work, I see you inside and out, and put that in the work.  I always see you at your best, so have no fears!

As the world’s fastest silhouette artist, my cuts are smooth and accurate.  Speed matters.  For the world record I did 144 silhouettes in one hour.  At most events I do a silhouette every two minutes.  This is great at weddings and corporate events when you want many people to have a treasured keepsake” 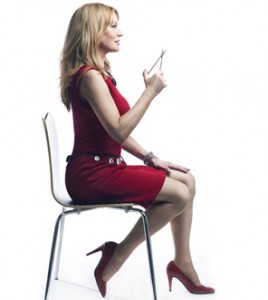 Cindi is also a co-founder of the The Holly Rose Ribbon Foundation where she creates custom “Silhouettes For Survivors,” which are available for purchase. All Silhouette proceeds are dedicated to helping uninsured breast cancer survivors receive free reconstructive surgery.

In a family of three girls, Cindi grew up in Houston and attended Bellaire High, where she was editor of the paper and studied advanced art. Her father was a lawyer, and her mother, and interior designer. “My mother was selected to be a runway model with Ford Agency, but she opted to do work for Dad. She had very beautiful taste.” She was always introspective, always writing poetry and with a sketch pad in her hand. Her artistic bent won her awards in poetry and art contests. “Friends began asking me to draw them, and I never turned anyone away. Soon people were calling me to ask if they could commission me”

Cindi worked her way through college by doing silhouettes for customers at Astroworld and in DisneyLand, California. There she taught herself to hand cut silhouettes, the ancient French way of looking and cutting, without preliminary sketches, in one minute or less. With talent and speed going for her, Rose broke speed and production records.

Cindi graduated from the University of Texas with Honors in Fine Arts and Journalism. Further Art studies took her to Anderson Ranch in Snowmass, California for silhouettes in clay, and oil, the Glassell School in Houston where she learned bronze sculpture, and to Paris, France, where she studied the play of light upon objects under Mademoiselle Rinette.

After college graduation, she went to work at Disneyworld in Florida, where she did more than 600 silhouettes a day, including ones of Mohammed Ali, Joey Bishop, Sammy Davis Jr., and others. It was at Disney World that she changed her name from Cindy to Cindi at their suggestion. She loved it and never changed it back.

Eventually, she began cutting silhouettes for Neiman Marcus, Foley’s, Joske’s, Saks, Dillards, Hermes,
Lord & Taylor, Kaufman’s (in Pittsburgh), the Europe in London, and on the BBC TV show, Blue Peter. She set her world speed record in San Antonio for the Express News which timed it. She cut 144 silhouettes in one hour breaking her own record she set the previous year of 133 silhouettes in one hour.

Hire Award-winning Silhouette Artist Cindi Rose for your next party, wedding, corporate event or charity fundraiser, and entertain your guests while you give them each a historical keepsake! CindiSilhouettes@gmail.com